I truly did have the strongest of intentions of getting a journal (or even two!) written during my time in Houston, chronicling the multi-faceted events that kept me more than busy for these past 6 weeks, but alas, I’m in nearly the same, identical place on the highway as for my last entry, simply headed in the other direction. (Ah, and yet how sweet that it is the direction of home!) I suppose it’s another example of life coming full circle giving us a golden opportunity for closure! 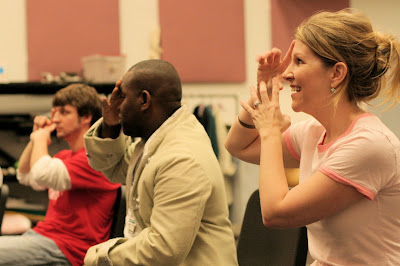 (In rehearsal for Cenerentola at HGO)

Were it not for the fender-bender which we encountered just north of Dallas yesterday evening, (ok, let’s be honest…can a ‘fender-bender’ accurately describe an accident that breaks your radiator, power steering and air conditioning all in one swipe? I didn’t think so.), I’d still be riding an enormous high from the magical experience of this Cenerentola at the Houston Grand Opera. From the first moment of the first rehearsal, I knew this would be a special experience. The directing team, El Comediants, from Barcelona Spain (the very same squad responsible for creating the Opening Ceremony to the Barcelona Summer Olympics!), arrived on the scene bubbling over with creative ideas and a contagious, positive attitude, feeding their imaginative concepts by the minute. They had a very clear idea of the ‘look’ they wanted for the show, and yet were still completely flexible in letting us throw our thoughts and impulses into the fire. What we ended up with was a VIBRANT, intelligent, funny, heartbreaking, fresh approach, full of traditional as well as new ideas, wild costumes, rambunctious rats, geometric makeup, and an audience standing on its feet every night!

I cannot stress enough the importance of having a positive working environment where the singers not only feel free to contribute and take risks during the rehearsal process, but are encouraged to do so, as well. I think with this approach you arrive at the opening night with a cast that isn’t preoccupied with being ‘correct’, but instead are busy CREATING on the stage. I never want to work any other way!

I was able to steal away just before the opening night to receive an award from my Alma Mater, Wichita State University, where they generously bestowed on me the honor of “Young Alumni of the Year”. To say I was honored and deeply touched would be quite an understatement, not only because of the number of distinguished graduates the University consistently produces, but also because of the number of old friends and supporters that came to share in the evening. In seeing the faces of the influential professors beaming with pride, the committed members of the first church choir to hire me as their conductor and leader giddy with excitement, and some of my oldest, dearest friends reducing me to tears of laughter with the never tiresome recollections of Madrigal Feasts and choir tour escapades, I realized once again how many people have had a hand in guiding and preparing me for my life. I was quite emotional receiving the award, as thoughts of my Dad’s numerous trips to hear me try out the odd choir solo or my first Hansel were still quite fresh, as I suspect they will remain for quite sometime. What washed over me as these smiling faces listened to every word of my off-the-cuff acceptance speech was that each of them is with me every single time I take the stage. I looked out on their familiar faces and realized that they all contributed to the building blocks of my foundation – NOT ONLY as a performer, but more importantly, as a person. I’m so proud to say I am “Shocker”, and their continued recognition and support mean so much to me. It served as a beautiful reminder that you never know what contribution a solitary person just might bring to your table, nor what kind of effect you just may have on them. How thrilling to know we are always contributing! 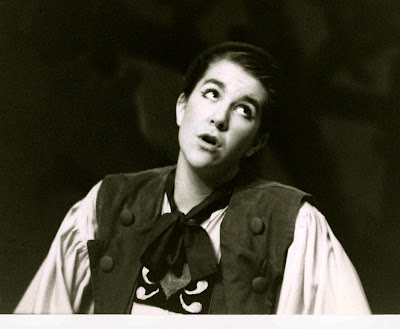 A great opportunity happened upon me just before the final dress rehearsal, in that I was invited out to a local high school to sing and speak with them about ‘what I do’. I insisted that they attend the final dress rehearsal before I visited them so they could see me in the context of ‘what I do’, and I think it was a roaring success, judging from the ‘whoops’ and ‘woo-hoos’ resonating from the hall that night! Come to find out, even though it was the first opera for every single one of them, they LOVED the show, and when I walked into their classroom, their enthusiasm and excitement bowled me over. I was mentioning this visit to Anthony Freud, HGO’s General Director, the next day, and I said, “Who knows if any of them will grow up to sing in opera, or run a company, but MAYBE they’ll buy a ticket in the future, or contribute $100 down the way.” And he simply looked at me, shook his head, and replied, “but Joyce, that’s not why we do it. That’s not what outreach and education are about: they are NOT a means to an end. We do it simply because we must.” I knew in that precise moment that Houston is an extremely fortunate city to have this man of vision at the helm, and that the world of Opera in general has hope, knowing there are people running it who have such a committed, focused belief in what we do.

Which makes for a lovely segue to a truly horrid article that recently polluted my inbox: there is a ‘journalist’ who writes for the El Paso Times, Mr. Muench, and he saw fit to berate and bully the El Paso City Council for passing a grant to help the El Paso Opera bail itself out of dire financial times. Actually, he saw fit to ridicule the art form with outdated and offensive stereotypes, proceeding to chide the children of the town warning them that they would surely rather take their “TAKS” tests than attend an opera! Well, I love a good fight, and adored registering my response (along with hundreds of other singers), and adored being handed the opportunity to defend my passion to this idiot. I suppose there always have been idiots afloat out there, spewing venom and poison against things that make them think and which challenge their comfort zone, but I for one am thrilled there are also intelligent, passionate individuals who do not let bullies like this man intimidate them into veering away from their vision. We have people like Anthony Freud who believe in committing to a community and reaching out to young people, simply because ‘we must’.

We face many obstacles, as have all the great artists of the past, but we are strong in the fight, and we are winning one small classroom at a time! I don’t know how much I can truly affect on my own, but I can say that my commitment is to bring honesty and conviction to all that I do. (With the committed and always brilliant Cathy Cook: a fellow WSU alumni, as well as a beautiful person and singer)

So we’re almost to the end of the journey. I get 10 days (whoops, make that 9 days, thanks to my fender…ok, to my accident!) at home to: file my 2006 taxes, spend 2 days doing master classes at a local college, memorize the final stubborn songs for my recital, figure out my gown situation for said recitals, have a birthday party, catch up with family and friends, bake a little, or maybe bake a lot, chop away a bit more at stubborn, glorious Octavian, dry clean my stale, luggage-bound winter clothes, get some face time with my squirmy, boisterous, brilliant nieces and nephews that are growing by bounds and leaps, sort through the heaped up mail and bills, throw in a few interviews to promote my new disc, address the nasty leak in the master bath that was rearing its ugly head on my last 2 day stay at home, squeeze in my unwelcome dental exam, and maybe, just maybe take in the current episodes of 24. (JACK! Your DAD!!!!) Wait. Is that all? OH. Looks like constant shoveling may be in the forecast as well!

Here’s to a beautiful Valentine’s Day for you all, and let’s hope the fender-bender quota has been met for the next several decades!
Posted by Yankeediva at 8:31 AM No comments: