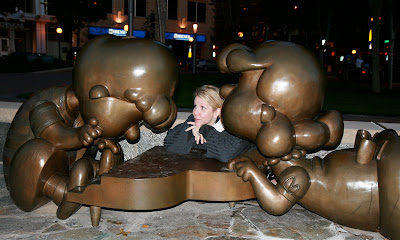 ...is something I often need to remind myself to participate in when things have gotten a bit hectic. If I can manage the breathing part, the rest will likely follow. Last SATURDAY I was in Minneapolis for my husband's "triumphant" conducting of "Casanova's Homecoming" by Dominick Argento (what a brilliant score and LIBRETTO!!). SUNDAY found me flying to San Francisco to rehearse a few hours for my recital on MONDAY night to a wonderful crowd of my west coast "family". 6:00 AM TUESDAY morning a car arrived to whisk me away to the airport to fly to Los Angeles to begin my rehearsals for my LA Opera debut in Barbiere ... after getting lost on the freeway system several times, I had my 2 1/2 hour costume fitting, (3 costumes x 5 layers each = 15 hemlines to stand tall and motionless for whilst they take exact measurements!), followed by 6 hours of staging rehearsals. WEDNESDAY brought another 6 hours of staging and I whisked myself away (not getting lost this time, thank god!) to LAX for the red-eye flight to New York City. Arriving at 7:30 AM on THURSDAY, I had more fittings for gowns, a brief nap (which wasn't productive at all, since I couldn't stop the ol' mind from spinning off it's axis with the list of things I needed to accomplish in the next 10 hours!), and before I knew it I was standing at a podium thanking the world for the wonderful "Opera News Award." (Much more on that later) No after parties for me, for I had to get home to finish lining up things so that our apartment would be ready for it's first renter, not to mention being sure I was awake and packed for the car that was coming at 5:15 AM FRIDAY morning to whisk me back to JFK to catch the plane that would whip me to LAX and into my 6 hours of piano dress rehearsals for the day.

So we've crossed off the "Break a leg" mantra for me, and now any of those jokes about divas staying in bed all day eating bon bons? They're off limits, too!!!

Sadly, a full-fledged weekend doesn't seem to exist in my world, so it's back to the theater for orchestra stagings today, BUT I kept breathing, took all my vitamins, and look - I'm still standing!!! And breathing.....
Posted by Yankeediva at 1:50 PM 15 comments:

My senior year at Bishop Miege High School in suburban Kansas City, I was certain - and I mean CERTAIN! - that I would be a high school choral director, and so I searched for schools that had great music education degrees. After sorting through loads of brochures, I settled on The Wichita State University, known for it's wonderful teacher programs, and as it so happened, an outstanding opera department. I didn't know about the latter until well into my theory classes: upon my arrival there seemed to be a very serious, elite "opera clique" of amazing performers that seemed much larger than life, and actually, untouchable to me. The program was run by the omnipresent, towering Dr. George Gibson - who to this impressionable freshmen seemed not just larger than life, but all-powerful and imposing on the highest level.

As I found my footing, I found that people would come from around the country to study voice with him and that he was quite a revered opera director. To me, he was the kind of presence that required you to divert your gaze while walking in the hallways, because he was THAT powerful! Somehow I got enticed into being in the chorus of Die Fledermaus that he was directing, and he was fierce in his directing, exacting in his expectations, and tolerated nothing less than the best. (His motto, which he exemplifies in every area of his life, was Dedictation, Discipline and Determination: the 3 D's!)

Well the rest is now history, but there is no getting around how influential he was on my formation as a singer, and I've told him repeatedly that when I stand on stage, there is a part of him that is standing there with me - and most happily, he continues to be an important part of my life. But the kicker is that I am just one of MANY whose lives he has touched! 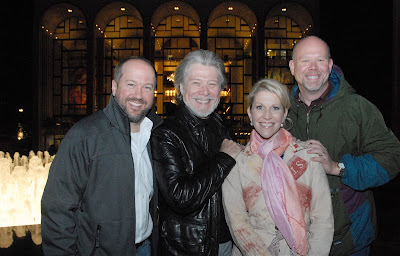 That might not be a big deal if we were talking about Juilliard or Eastmen, perhaps, but Wichita State???? 4 of us are singers, and 1 plays oboe in the orchestra.

We thought that was rather amazing. And so we organized a photo shoot! 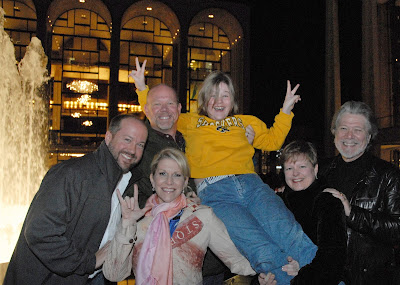 My thought about writing about this, is that once I set my mind on being an opera singer, there was a temptation to believe "But I have to attend one of the BIG music schools!", and it was hard not to sometimes feel inferior, because I didn't have a "big name school" as affirmation that I was "good". Instead, I realized, looking at the 5 of us, each of us takes a very different route and path to get to where we are. I attended school with a number of HUGELY talented people, but they each walked a different route to live their lives. I think the urge for younger singers to think there is ONE way, ONE key to a career is just simply misguided. Get yourself in the mind set of the "3 D's", and get about taking your very own journey, and then ENJOY THE RIDE. 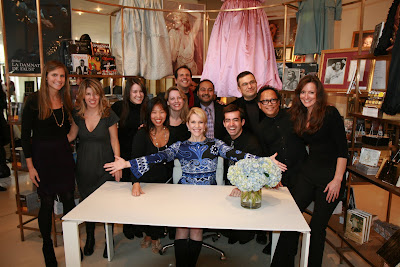 My ride brought me to the MET Opera Shop on Tuesday, and it was wonderful. The fabulous Opera Shop Staff really rolled out the red carpet for me, welcomed me with open arms, and a wonderful crowd came out to meet me and have me sign their newly acquired discs. THANK YOU to each one of you for purchasing the discs! (As everyone knows, every single disc makes a difference in this industry right now!) I'll always be a bit mystified that this girl from Kansas is on this particular journey, but I never stay in that frame of mind too long. But an enormous source of my joy is knowing all the people along the way who have helped me on the way, and reveling in the journey of my colleagues as well.

Climb every mountain - or at least one of them!

Yesterday the NY Marathon took the Big Apple by storm. The women's race saw a heroic figure and favored winner fight a horrible leg injury and still cross the finish line, the men's race saw a great upset with the USA taking the win for the first time in ages, and I got to cheer on my very dear friend in his 6th race (despite the fact that while fighting the crowds to get to the finish line I didn't actually SEE him cross the end - but I was there in spirit!) What I did witness took me by surprise. I finally fought for a spot in the park, slightly elevated, at the 26 mile marker; from where I stood, I saw runner after runner pass the point where they knew they would make it - 400 meters to go? That was do-able. 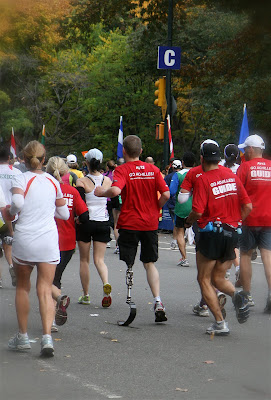 While the athletes I cheered on were complete strangers, in a matter of minutes I began to identify with them, marvel at them, and finally admire every single one of them for their endurance and strength. It struck me that they were all participating in the same event, running those same steps, accomplishing the very same task, and yet every single one of them had a different story which brought them to that 26th mile. They each were climbing an enormous mountain of their own: some running to beat their personal record, others running to simply cross the finish line for the first time, some running for a cause, others running for a single person as a memorial, some running for "Italy", others for "France", and I stood by in complete and total amazement at the physical, mental and emotional journey they all were making. 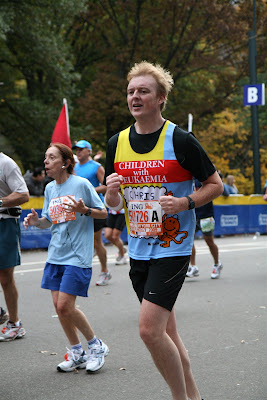 Some 40,000 runners made the journey yesterday, and I thank each one of them for the inspiration they provided to me, and hopefully to others as well. How I LOVED taking part in a day where excellence and tenacity were on such vivid display, as well as watching people from every nation on earth (or so it seemed) were united in perfect harmony - all striving for the same thing, completely regardless of race, creed, sex, you-name-it, and they all were crossing the same hurdles and triumphing equally, and supporting each other with each step they took. Oh wow - it IS possible.

And of course, as usual, there was the perfect example of harmony and peace right in front of my eyes: 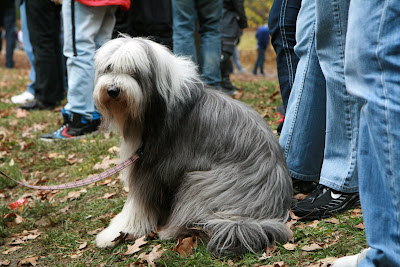 Yeah, it's all pretty simple, in the end.

And while I am not at all convinced that I could run a mile, much less 26.2 of them, I did hike my own personal mountain in recording my latest Rossini Disc (sorry - here comes another plug!) and I will be SIGNING the discs Tuesday at the Met Opera Shop. Please come on out and wear out my arm!!
Posted by Yankeediva at 1:24 PM 6 comments: