The beautfiul end of the tunnel! 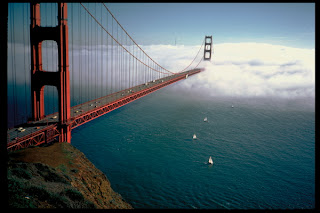 This morning the dense fog hovers claustro-phobically over the city by the bay, and while it’s tempting to feel as if the day will stay dreary and overcast, one knows with authority that it will soon lift, and that the scorching, luminous sun will emerge to reveal the blinding cerulean skies above. Ah, the marvelous marvels of San Francisco!

Tossing aside any valiant attempt at a cohesive entry this time around, I offer instead the varied ramblings of a tired, yet energized, close-to-vacation singer with the soundtrack of “School’s out for the summer!” blaring through my head! It feels like decades since I’ve claimed this song as my June Anthem! Ramble away: 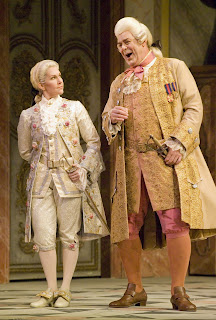 *What an unabashed thrill, and constant, on-going master class to watch Kristinn Sigmundsson craft his Baron Ochs every night. I’ve never been able to stomach that character much before to be quite honest, for it can so very easily cross over into a nauseating caricature that makes the 4-hour opera feel as if it is the entire Ring Cycle given without intermissions. My hypothesis on why his creation actually evolves to be so endearing and ultimately sympathetic: Kristinn respects and loves the character, never settling for the obvious choice. He truly thinks he is entitled to all he is demanding, and considers himself a true Don Juan in each of his encounters. It is an unabashed delight to watch. Throw in his majestic, malleable facial expressions and you have a masterful performance on hand. Oh, right – I nearly forgot: he also SINGS the bejeebers out of the role! Heilige Mutter von Maria Taferl he’s good!

Lesson learned: never take for granted that a character (or person, for that matter!) is decidedly, 100% worthy of being written off! 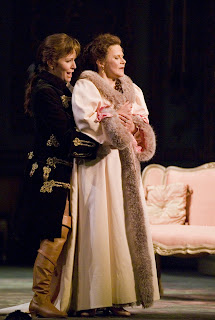 *What a lesson in humble artistry to share the stage with Soile Isokowski’s Marschallin. She has the unique ability, even in a 3,500-seat theater, to draw in the audience, inviting them to listen to her most intimate thoughts spun out in a refined, most delicately silver-spun line, breaking your heart with her honest, pure sound. Her perfect use of the text, her trust in the beautiful vocal writing of Strauss, her innate coloring of each phrase, and her ability to get out of the way of the music gives her Marschallin such a human, fragile life. And as far as I’m concerned, her voicing of the line, “da drinn ist die silberne Ros’n…” is all one would ever need to believe that a true paradise exists somewhere. It is “Desert Island” good. 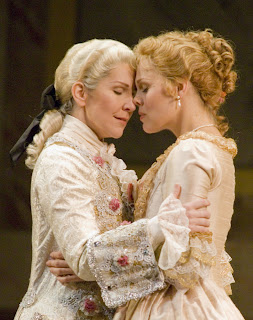 *Anyone concerned about the direction of opera in today’s media-driven climate need not worry if it produces singers like Miah Persson. What a vibrant, committed artist who sings beautifully and insists on never being less than 100% committed to the union between the music and the drama. She sings with a technique that serves her unbelievably well, even through dreaded allergies and other physical circumstances, she is impeccably and thoroughly prepared as a colleague and an immaculate musician, and she brings an instinctive, vital energy to the stage that makes Sophie a much more multi-dimensional character than she might appear on paper. There is no better scenario than to be on stage with colleagues that LISTEN to you, REACT with you, and CREATE the drama in real-time, and Miah does this in spades!

Lesson learned: look to singers like this to insure the future of opera!

*Kudos to any casting/artistic director who is committed to casting an entire piece from strength to strength, knowing that a truly breathtaking theatrical event thrives on every role being brought to vivid life and sung impeccably well. I don’t know that I’ve witnessed a better example of that than in this realization of Der Rosenkavalier. There wasn’t one sung line where the audience was asked to suspend its belief or exhibit patience with a sub-par performance. From the perfectly accomplished Faninal of Jochen Schmeckenbecher (best name in the world!), to the Duenna of Adler fellow Heidi Melton (watch out opera world, here she comes!), to the brilliance of fellow Wichita State Alum, Cathy Cook’s gloriously sexy Anina, it was a stellar cast from top to bottom, and allowed the audience, I think, to truly escape into and believe in this world. This gets my blood pumping! As a rich bonus, every single person in this cast was an unmitigated joy to share the front and back stage with, and made this experience yet another magical moment in time for me.

Lesson learned: there are no small roles. Well, OK, let’s be honest: there ARE, in fact, “small roles”, however, this lesson is that they don’t automatically or necessarily yield a small IMPACT! Bravi, tutti! 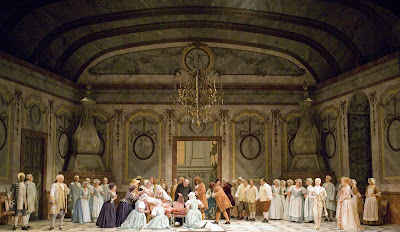 *This is the most glorious music to sing. Some people have asked me if I approach the singing differently, or question why my voice seems to take on different colors/timbres in this role. Honestly, I’m not smart enough to juggle separate techniques for each genre I sing – I have one ‘technique’ and sing in one “manner” (IF I’m behaving myself) and fully expect it to serve any type of music I may sing, be it Rossini, lieder or Strauss. I fully believe the answer simply lies in the fact that the language, the vocal writing and the orchestration all work together to inform the colors and phrasing in one’s singing. It comes down to singing what has been handed to us by the composer (in this case perfectly penned by Strauss), and staying out of the way of the music. If, for example, Rossini, Strauss and Britten were all given the same notes to play with, they would each come up with a completely different interpretation, set with different phrasing, unique text, and separate requirements – regardless of the notes being the same values on the page, the results would be light years apart in sound and impact. This is one reason I love exploring varied repertoire, and never find even a hint of boredom setting in.

Lesson learned: stay out of the way, Stupid!

*I love my job. I continue to pinch myself that I am continually given the opportunity to bring such masterful music to life. The fog that has hung over me this past year with the loss of my parents is undoubtedly real, profound and life changing, but through the midst of the mist I have had music to cling to. I endeavor to continually recognize that music is not the only thing in my life – it is simply a part of my life. But I have had the blessed fortune to be able to turn to it as a source of comfort and guidance and even therapy. In a most literal fashion, singing the role of Idamante seems almost cruelly ironic, but as I’ve noted before, Mozart’s music possesses a cleansing and healing quality entrenched in each phrase, and I know that it serves to be a guiding force through my grieving. While the words of the Marschallin can touch listeners in nearly any phase of their life, I know that listening to them each night on the stage has had a calming effect on me, and penetrates my heart deeply in my need to let go and not hold on to the past. It was as if my Father were whispering those very words into my heart to help me move forward.

(Light must we be, with light hearts and light hands, to hold and take hold, and to let go…)

Well, like the inevitable clock striking midnight, the fog has now lifted, inviting all to jump with abandon into the day here in San Francisco. It’s nearly time for me to clean out the refrigerator, clean up the rental unit, pack up my belongings and say goodbye to this rich city. I will surely miss the fresh air, the inventive, delicious cuisine and the “brisk” breezes, however it is the friends, the audience and the cast members that will leave the biggest imprint on me. Little do they all know it, but they have each helped me through a very difficult time with their patience, their enthusiasm, their artistry and their friendship. I began the journey of my first Octavian here, healed some of my grief here, walked through the light at the end of the tunnel, and quite simply, loved every minute of it. 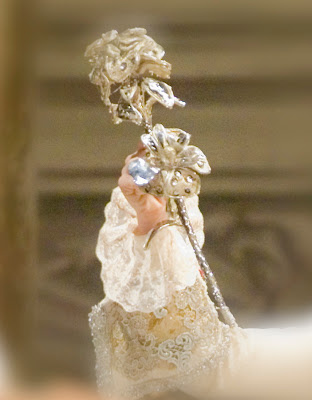 congratulations on rosenkavalier! i was happy to find your blog (through oboeinsight). i once met you a long time ago, i was about 14 (so that's about 10 years ago now, wow) and i did HGO's opera camp, and you came and spoke to us about being an opera singer. i was very impressed. my family and i saw you perform in many HGO productions from back when you were in the studio there, and we've been happy to see how successful you've become. the last time i heard you perform was a recital i went to with my mom at ravinia, maybe 2 summers ago, and i enjoyed that very much! now i am getting a master's in oboe performance, and blog to keep the reeds from driving me crazy. could i add a link to your blog on mine?

Hi there! Thank you for sharing these beautiful turns-of-the-phrase and ever-inspiring patches of your life. You are weaving a most eloquest blanket of memories.

I heard your Met debut when I moved to NYC and began ushering part-time at the Met I am singing my first (and finally) Italian Cherubino in October. Ushering during your run of Figaro was a masterclass for me!

Your ability to see love and goodness in everything, your pespective and your openness is really a gift to a studying singer. You are so strong, and I just want to thank you!

Thank you all so much -- these comments mean the world to me!